100 Thieves Peter Park: Twitch creator joins 100 Thieves- Peter Park is a well known face in the Twitch streaming community. He recently surprised fans when 100 Thieves dropped the announcement that the popular American Twitch streamer had joined the organization as a creator. The video, featuring the likes of Valkyrae, created quite the stir within the community and fans shared their reactions to the new signing as well. For more such updates about 100 Thieves and its creators, keep following .. 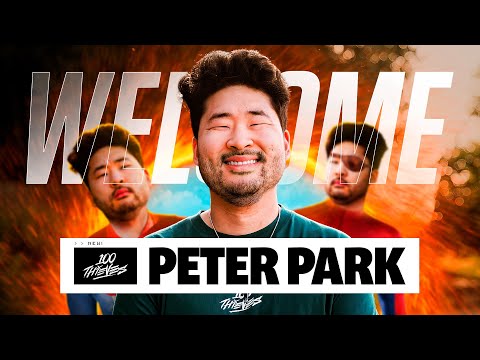 Peter Park is known to be close to several creators from 100 Thieves, so fans expect he will fit right in into the organization.

Peter Park is a popular American Twitch streamer who shot to fame due to his Just Chatting streams and reaction streams on the Amazon-owned platform. He is also popular for streaming with multiple 100 Thieves members like Valkyrae, Leslie Fu, and others. Naturally, when the announcement of Peter Park joining 100 Thieves dropped, fans were exhilerated. The popular eSports organization posted a video on Twitter, featuring Valkyrae and Peter Park, announcing the collaboration.

We’re so excited to finally have Peter as a part of the team to create even more content with us. Peter’s going to need to be everywhere… somehow. #100T pic.twitter.com/TQD9s82QmS

In the 5-minute long video, Peter Park could be seen trying to get Valkyrae’s approval for a podcast, which got denied. However, after consultation with Leslie Fu, Park came up with the idea of a podcast with Kyedae, where they could discuss different topics from a “Boomer vs. Zoomer” perspective.

From the announcement, fans can deduce that Peter Park will be hosting a podcast with Kyedae as part of 100 Thieves, apart from his regular streams to his audience.

Fans react to the news of Peter Park joining 100 Thieves

As soon as the announcement dropped, fans flooded the Twitter post to congratulate the streamer. However, due to his close association with members from 100 Thieves, no fan was truly shocked to hear the news of him joining the prestigious eSports organization.

WHO WOULD HAVE GUESSED

was it not obvious enough

OMG WHO COULDVE SEEN THIS COMING? 😱

However, fans also took the opportunity to congratulate the streamer. He had appeared in 100 Thieves videos for quite some time now, so it was only a matter of time before the streamer made his association with the organization official.

only natural for a true king to join

Peter Park had also been closely associated with OfflineTV and Friends, and had appeared in a bunch of their videos as well. However, this is the first time the Twitch streamer has formally been associated with an organization, and his fans could not be more excited.

It has not been announced when the streamer will start streaming for 100 Thieves, but fans can expect the announcement to drop sometime soon.

For more such updates about 100 Thieves and its creators, keep following ..