Fortnite x Wolverine Zero: Loopers who are subscribed to the Fortnite Crew Pack ardently wait for Epic Games to unveil the cosmetics…

Fortnite x Wolverine Zero: Loopers who are subscribed to the Fortnite Crew Pack ardently wait for Epic Games to unveil the cosmetics each month. The Fortnite Crew Pack features exclusive outfits, hence players are quite interested in knowing about its contents. For the month of July, Phaedra was an excellent addition to the game. However, Epic Games has now released Fortnite x Wolverine Zero collaboration for the August Crew Pack. It is anticipated that the addition of the popular Marvel character would be even bigger than the previous month’s cosmetic. For more news related to Fortnite skins and cosmetics, follow .

A few days back it was leaked that a popular Marvel character would soon arrive to the game. Developer Epic Games eventually released the Fortnite x Wolverine Zero outfit. Marvel collaborations have been successful in the past. But this is the first time gamers are getting any superhero outfit for the Crew Pack. Hence, it is expected to see a lot more success than the rest.

Fortnite x Wolverine Zero: Everything that gamers need to know about the August Crew Pack

If you’re smart, you don’t want him for an enemy 👑

The Fortnite x Wolverine Zero August Crew Pack was hidden in the in-game files. This file was decrypted recently and all its contents were revealed to the public.

Along with the Wolverine Zero skin, players will also get the Muramasa Blade pickaxe. There is the Best Fight You Ever Had loading screen as well up for grabs. 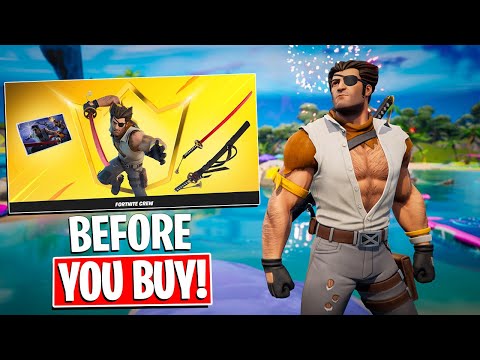 The release of Fortnite x Wolverine Zero has started off a debate in the community. Players and fans have been speculating about the return of the Marvel outfits in the game.

The Wolverine Crew Pack releases tonight and all Marvel’s Shop Sections were added back a few days ago, we might see them return tonight! pic.twitter.com/KbQSDB5hb1

Data miner Hypex reports that the Marvel Shop section was added to the game a few days ago. Therefore, it is a strong indication that the game will bring back all the Marvel outfits to Fortnite Item Shop.

They’ll bring back the skins tomorrow at the *earliest*

Data miner Shiina, on the other hand, believes that Epic Games will not bring the Marvel outfits so early. According to the leaker, Epic Games would prefer to do some good business from the Fortnite x Wolverine Zero August Crew Pack. Once gamers start investing in the new outfit, then only Epic Games will bring back the rest of the outfits to Fortnite.

For more news related to Fortnite skins and cosmetics, follow ..