Free Fire MAX – 5th Anniversary event calendar out now: Garena is all set to welcome its Fifth Anniversary event with loads of events and exclusive rewards. Although the event is still a few days away, the developers announced the event calendar for the players a while back. The mega-celebration will last almost one and a half months, keeping fans hooked to the game. Here is the list of the events and all the upcoming rewards coming in-game after 5th August. For future updates on Garena Free Fire and Free Fire MAX, follow ..

The much-awaited Free Fire 5th Anniversary event is almost upon us. The celebration will kick start on 5th August and will be available till 13th September. The developers have divided the events into five parts, with most of them featuring multiple events. The peak day, indicated through a yellow mark, will be 27th August. Popular singer, Justin Bieber, will perform in-game and also release a special track for the fifth Anniversary. So, the grand celebration will have a lot to offer.

A few hours back, Garena released the event calendar for the Fifth Anniversary celebration, from which players will have a chance to take a look at all the upcoming events.

Capsules Open: The event starts on 5 August and ends on 13 August. It will feature five separate events – Battle, Style, Map, Heroes, and Memory.

New Map: A new map, Nexterra is all set to make its way into the game on 20 August. Gamers can enjoy playing matches on this map until 13 September.

Time Limited Diamond Store: The Wave 1 event starts on 13 August featuring one gun skin and one Gloo Wall for the players. Meanwhile, Wave 2 will feature an outfit along with the gun skins. The latter one starts on the peak day and concludes on 9 September.

J Biebs Special: Garena already announced the collaboration with Justin Bieber, who will have his emotes and character in-game. Alongside these items, a concert, Beautiful Love Concert, is also scheduled for fans to enjoy.

Free Room Card: Players will receive room cards from time to time throughout the event. 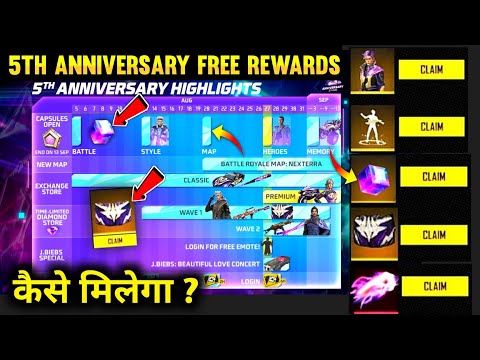 These are all the events that Garena has announced so far. Apart from these, a cumulative login reward event is already underway. Hence, the Fifth Anniversary celebration will have a lot to offer to players of the title. For future updates on Garena Free Fire and Free Fire MAX, follow ..