Google Pay, UPI services seem to be down in India, users report issues on Twitte


The Unified Payment Interface (UPI), the instant payment gateway which is owned and operated by the National Payments Council of India (NPCI) has been unavailable for over an hour.

Since the UPI servers went down, several users have taken to social media to report that the UPI server is down and that they are unable to perform any transactions using digital wallets or online payment services like Google Pay, Phone Pe and Paytm.

Several users were left wondering if there was really some problem with UPI or it was just a problem on their end.

Some users even posted screenshots of their failed UPI transactions on social media. One such user by the name of Arshad said that he had been trying to pay through Google Pay for a couple of hours but was unable to do so. Google Pay users have been complaining about UPI services being down for over two hours now. Another user by the name of Amar reported at 1:13 PM through his Twitter account that he was unable to receive payments through Google Pay.

Google Pay through their official Twitter account responded by asking him the particular issues he is facing so they can fix them. 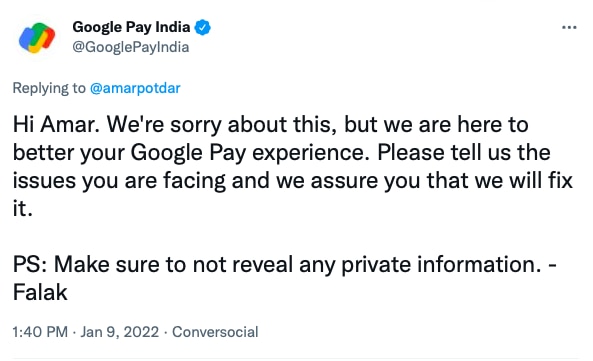 However, the same user responded saying the issue has still not been resolved after more than 4 hours.

Another Twitter user, Nakul Agarwal, more recently reported the same issue at 3:02 PM. To which Google Pay responded at around 5:10 PM, basically asking the same thing, which particular issue or error message the user was facing.

It is important to note that Google Pay has been reminding users not to reveal any private information on social media when reporting their problems.

From these responses, it seems Google Pay has still not been able to narrow down or identify the issue plaughing several users.

The data reveals that PhonePe and Google Pay are far ahead of their competitors in the Indian Digital Payments landscape. Paytm which once enjoyed the first mover’s advantage is now a distant third. While Amazon Pay and WhatsApp Pay are nowhere close to the 3 juggernauts of digital payments in India.

Charts suggest the selling in bitcoin and ether may be over soon, says Jim Cramer

Charts suggest the selling in bitcoin and ether may be over…