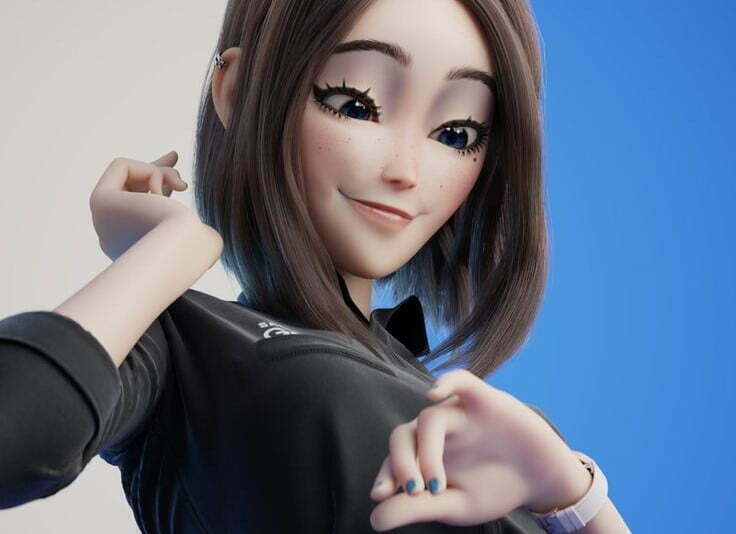 Samsung Virtual Assistant: Is Samsung Sam a Girl Samsung girl popularly known as Sam is creating a sensation all over the internet. Her popularity skyrocketed within a few days. Sam is breaking the internet. With her popularity, information like origin, and age creators are becoming vague.

Sam is partially official. She was created by the visual art production art known as Lightfarm. The production house works on areas like CGI, AR filters, VR applications, and videos.

The answer would be she is just a virtual assistant developed by an unofficial production house. She was just another art by Lightfarm. The only difference is she gained popularity through the internet.

Sam’s fan base grew immensely through Twitter, Reddit, and Instagram. Fans commented about her features and similar faces in real-life faces. Everywhere the comparison between other virtual assistants grew.

Why Samsung Girl is trending?

The story began when @louxtenyaiida posted the picture of Sam.

They posted four pictures of Sam, all these four pictures went viral within a few days. Internet users are not good at making future but also at finding the root of sensation. Samsung Girl can either join the virtual assistant legacy or can be rejected.

As per twitter researchers, Sam was designed by Lightroom. The characters already existed in a form of 2D art. Artists recreated the 3D version of the same character. Some of them even shared the archived post that introduced Sam. Below is the image showing the archived post from Twitter.

The origin started with the misinterpretation of some websites. They shared the news that says Sam is the official Samsung Virtual Assistant. Following memes and Twitter created huge content around the Samsung Girl. Initially, images are circulated via Twitter and then to Reddit, and then also to the other corners of social media.

The unofficial authority launched Sam in May 2021.

How does Samsung react?

Till now Samsung has not reacted to the Samsung Girl, they neither accepted nor rejected it. From May 2021 to till now they released no official statement.

The popularity of the character may trigger the Samsung Marketing team to include Samsung Girl as their official Virtual Assistant. Till now they released no official statement.

No Apparent Evidence yet! Sam was created in collaboration with LightForm and the Cheil. Cheil is a marketing agency owned by Samsung. As the process of creation started from a Samsung-owned company, there are chances Sam is an official’s assistant. To find out, we need to wait for Samsung’s response.

Why Samsung Girl is so hyped?

Samsung girl gained popularity via the internet. If we are about to discuss the reason behind the hype, then you will know the reason by looking at the picture of Sam.

Sam is an attractive and appealing girl She has blue eyes and a body-like body. She has perky and bright eyes with flawless skin. Her features are way too real and yet out of another world.

To be honest, the character gained popularity because of her appealing feature. She is a fantasy girl who found popularity on the different sides of the world.

The reason behind her hype is lucrative looks.

After the successful meme campaign, the audience is left with a lot of questions like how we can access Samsung girl.

Why isn’t she available? How we can access Samsung girl?

All these questions are asked in the below section.

As of now, Sam isn’t official, so the question of access isn’t answerable. Still, some sources provide a way to access Sam. Below is the method of how you can access Samsung Girl.

Now you need to set up the Bixby assistant. If you already set up the assistant, then you don’t need to follow this step.

You are done! Now you can chat with the Samsung assistant.

Samsung Girl is an internet sensation but not a real Assistant. All the rumors around Bixby are going to be replaced are wrong. No official evidence is available yet. Don’t consider her a real assistant.