The 10 Best Brendan Fraser Movies of All Time

Best known for his streak of films in the 90’s and early 2000’s, Brendan Fraser is an indelible staple from that stretch of time and has accrued quite the following. For many, watching an old Brendan Fraser flick can be a nostalgic comfort to go back to. This is why the fans are so excited about Fraser’s recent comeback to the limelight. That excitement is further accentuated by his role in the highly-anticipated upcoming film, The Whale, which could potentially be an Oscar-worthy performance.

There are a lot of folks out there who have a favorite Brendan Fraser movie, and that’s what we’re here to celebrate. From George of the Jungle to his iconic performance in The Mummy, these are our picks for the 10 best Brendan Fraser movies of all time.

Starting off with one of Brendan Fraser’s sillier films, Airheads is a fairly goofy comedy that boasts a fun cast of characters and a unique story. Three rockstar bandmates end up holding a radio station hostage because they didn’t play their demo, and yes, they are not very smart. Starring Adam Sandler, Steve Buscemi, Brendan Fraser, and an always welcome appearance from Chris Farley, this movie is sure to have some die-hard fans somewhere in this world. 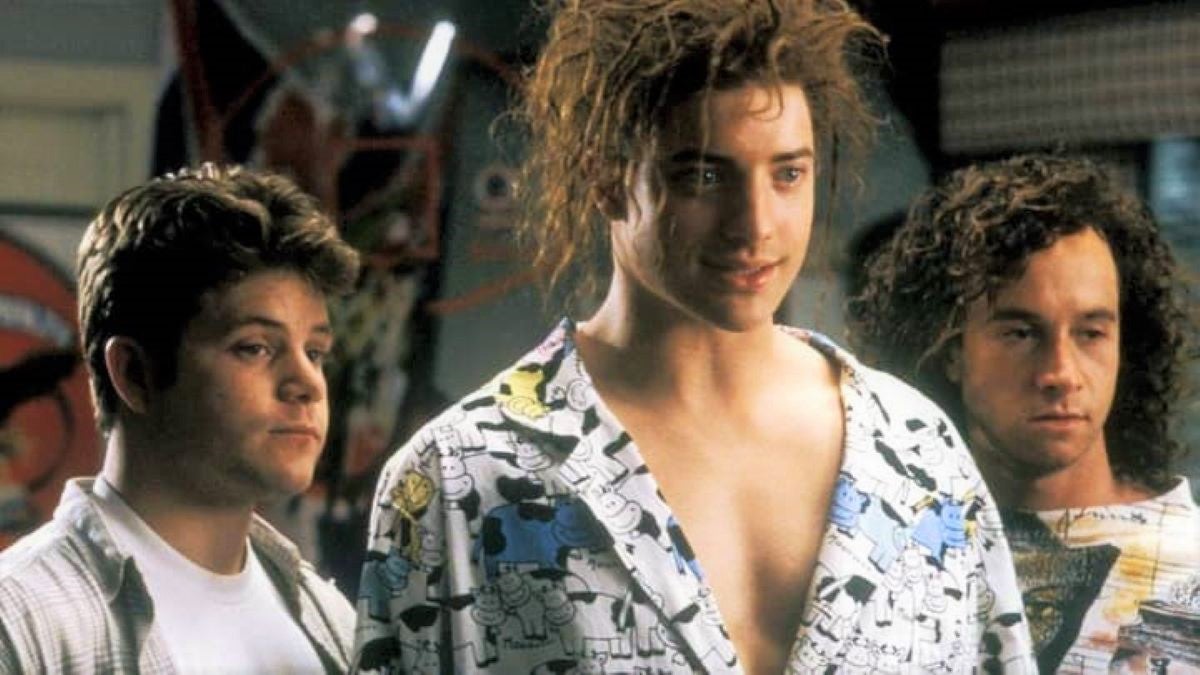 For the first time and not the last time, Brendan Fraser plays a cartoon-like troglodyte in Encino Man. Two high schoolers are trying to dig a pool in their backyard and end up finding a caveman frozen in ice, they then name him and adopt him as their own, gaining a lot of attention from peers. The best parts of this movie are Brendan Fraser as Link the caveman and Pauly Shore doing his Pauly Shore things, which really ends up carrying the movie. 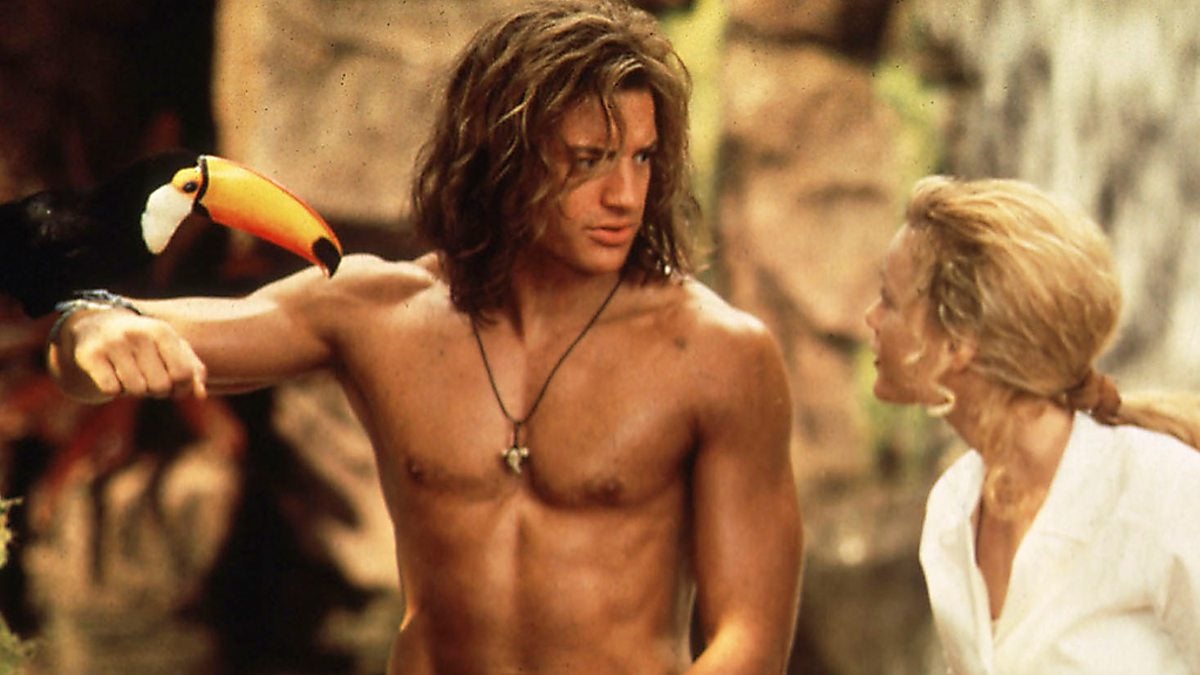 Five years after Encino Man comes George of the Jungle: a wacky yet witty slapstick comedy that introduced Fraser to the millennial audience. Raised by gorillas in the jungle, George is a clumsy Tarzan who slams into a lot of trees and falls in love with a wandering traveler from San Francisco. George instantly became an icon for younger audiences with this film, giving Fraser what would turn out to be a supportive demographic of young adults down the line. 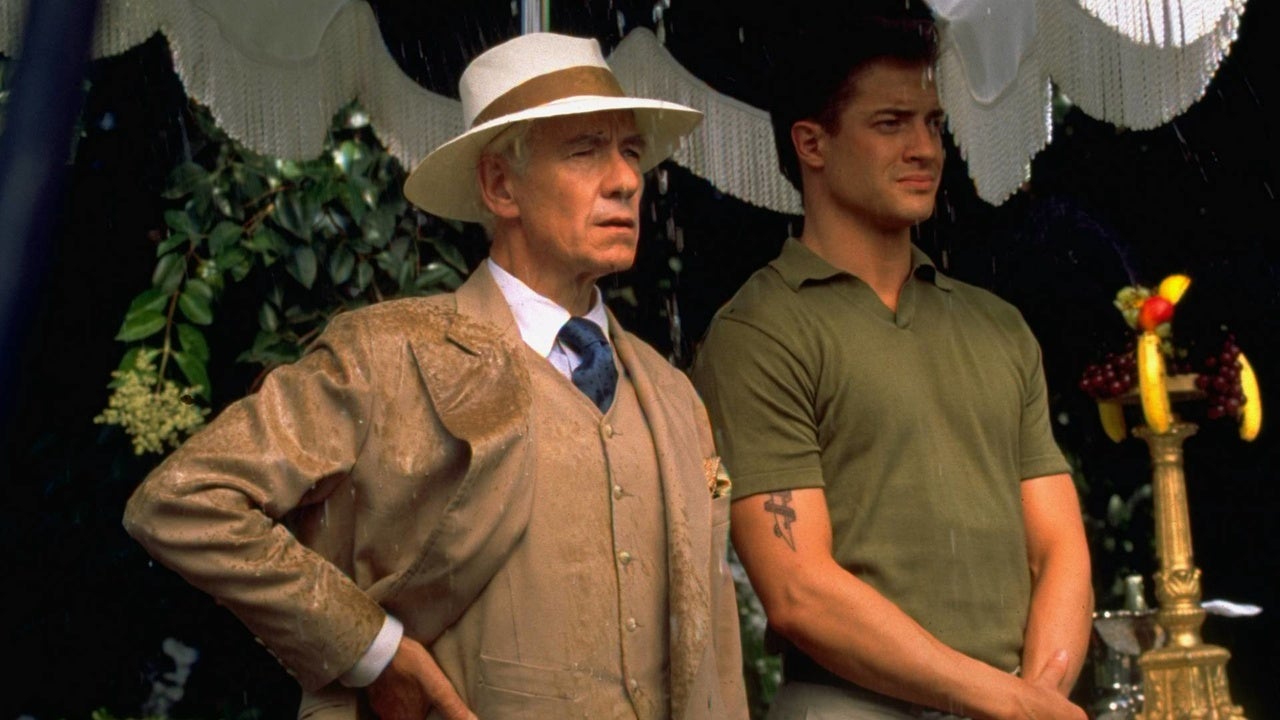 Taking a turn away from the comedy genre comes Gods and Monsters, a life-to-movie story about the last days of James Whale – director of Frankenstein (1931) – and his habits. Ian McKellen puts forth a stellar performance, which helps to boost the performance of Fraser. Fraser does a pretty good job as the angry and a bit homophobic Clayton boone, an ex military landscaper for Whale. Fraser surprises with a good dramatic performance, but still lacks a bit in the authenticity aspect that he brings to other films. 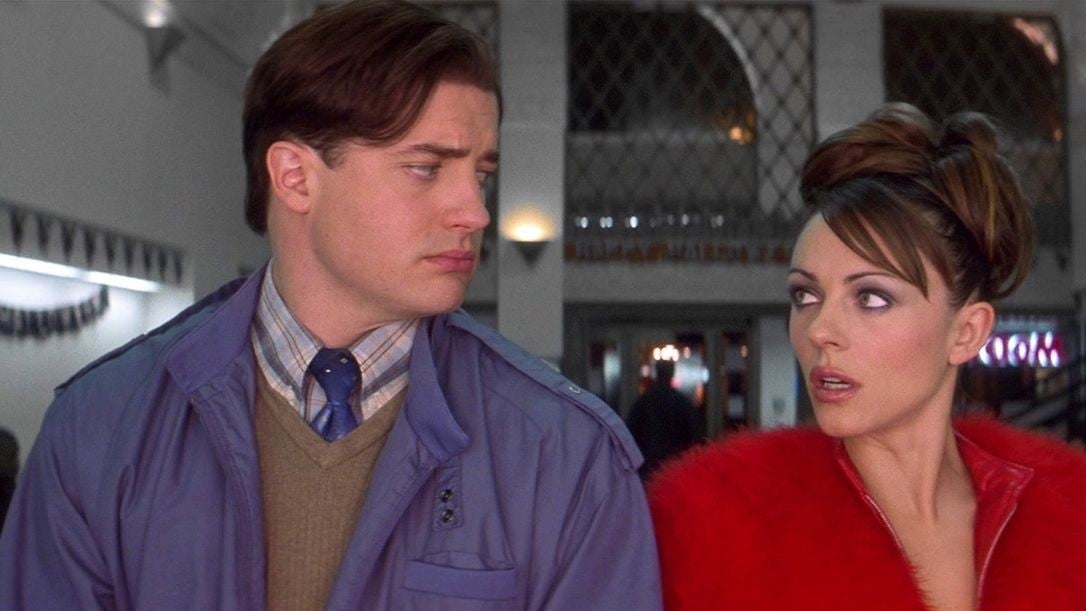 Back to one of his more comfortable comedic roles, Fraser dances with the devil in Bedazzled. Socially awkward office employee Elliot (Brendan Fraser) is given a chance to make his dreams come for a price: give his soul to the devil (Shannon Elizabeth). For the 7 wishes he is granted, he spends his time wishing for power, riches, sensitivity, and intelligence and of course, there is always a catch. Fraser does a pretty great job exploring multiple different roles in one movie but it’s still pretty kitchy. This movie definitely isn’t for everyone but send a page to 666 with any complaints you may have (not everyone will understand that reference). 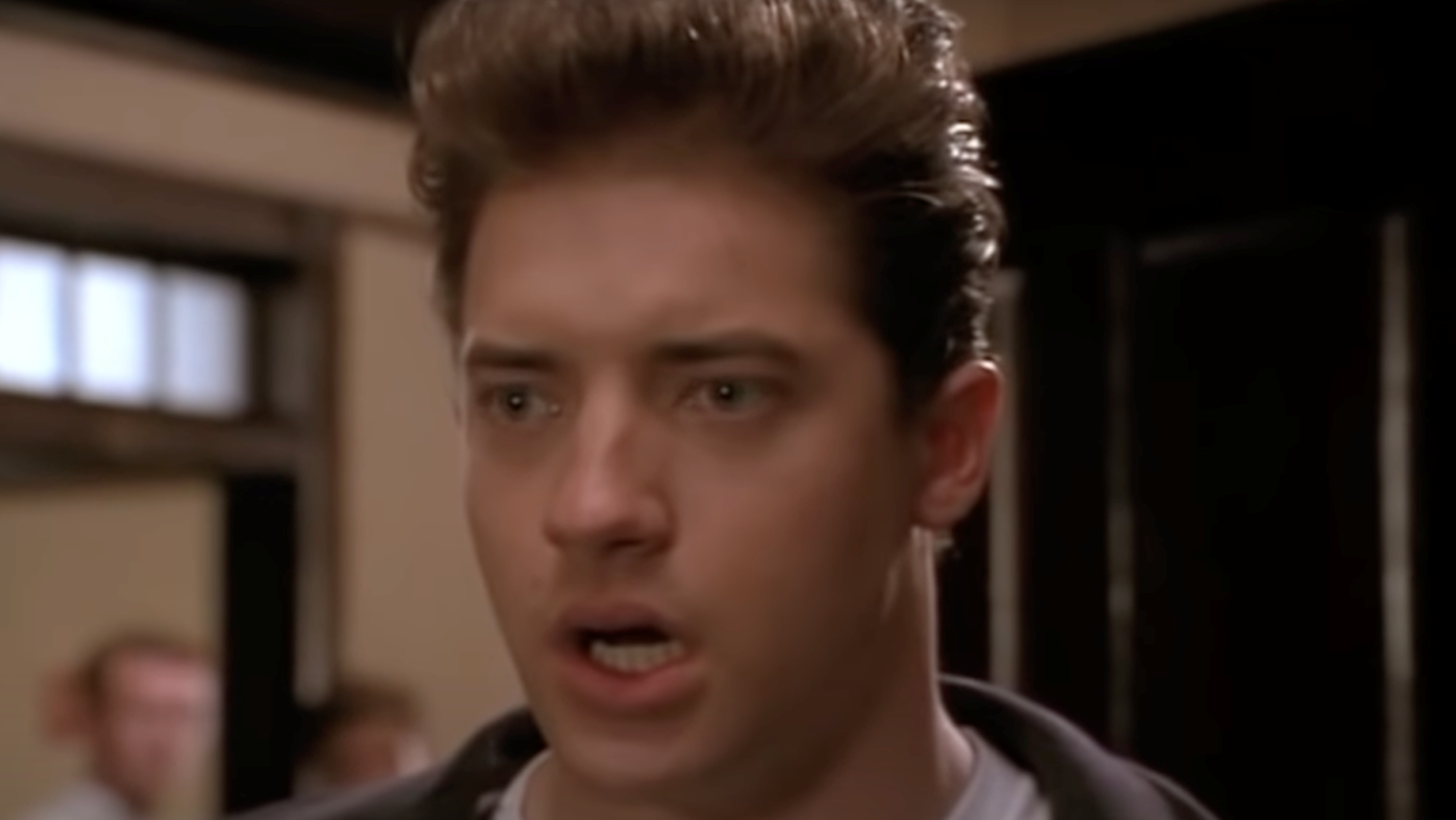 In what is probably his best dramatic performance, Brendan Fraser plays a Jewish student named David Greene at a high-end preparatory high school riddled with with anti-semetic discrimination. Coming from a rougher neighborhood than his new classmates, Greene makes a name for himself as tough and talented. Fraser’s overall performance in School Ties is impressive and foreshadows his future films in a funny way (Tarzan jungle cry in George of the Jungle, the big band and swing dancing in Blast from the Past). This movie also features some performances from a young Matt Damon, Ben Affleck, and Chris O’Donnell which helps the quality a bit. 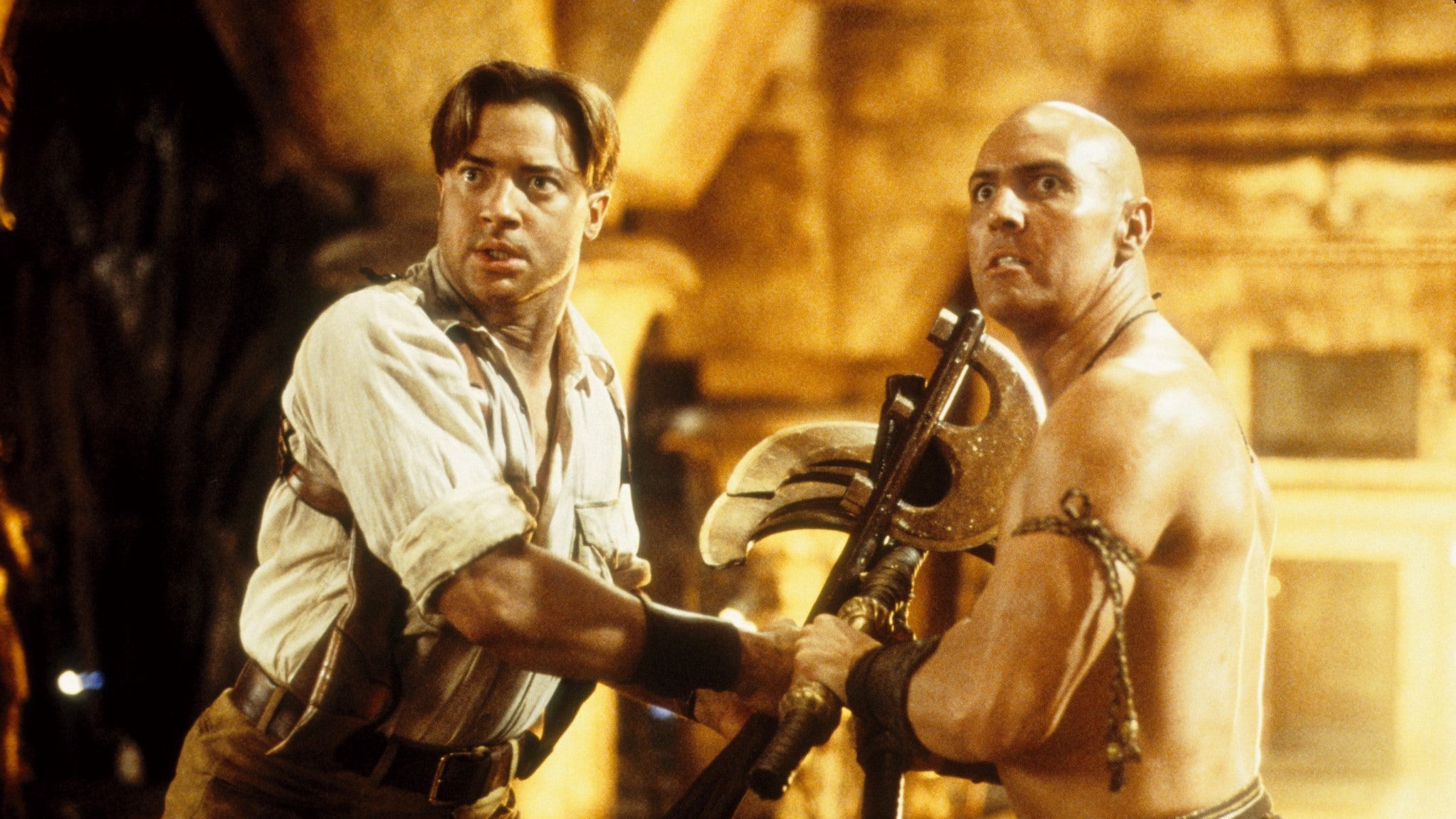 To reprise the most Fraser-y role of his career, Brendan Fraser returns as Rick O’Connell in The Mummy Returns. While this sequel was certainly not as celebrated as the first, it still absolutely delivers the action-packed comedy that audiences loved. Besides a fairly silly CGI Dwayne Johnson towards the end, this movie doubles down on the action from the first film and it makes it work in its own way. Either way, Brendan comes ready to play with the same over-the-top energy that was required of him to make this movie a worthy sequel. 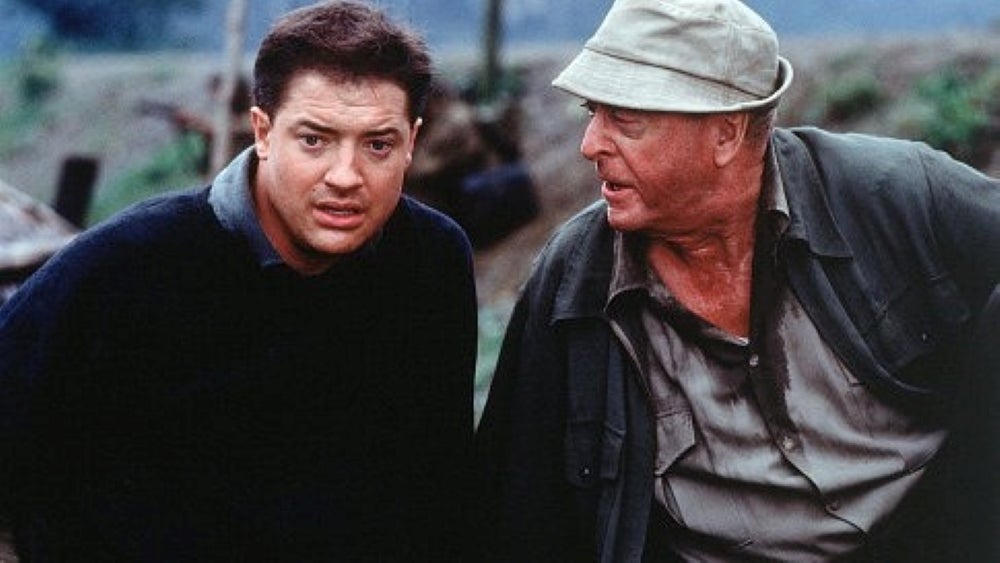 In the most modern movie on this list, Brendan Fraser brings his A-game as Alden Pyle for The Quiet American. Set in Saigon during the Vietnam War, expats Thomas Fowler (Michael Caine) and Alden Pyle are both there for their own reasons but end up pining over the same entrancing woman. Though the plot is a bit convoluted, once the movie comes to its conclusion, it truly resolves to be more than it seems. Once again co-acting with a living legend, the two play off each other much better than one would expect. In a simple tale of two wandering gentleman, nothing is as it seems. 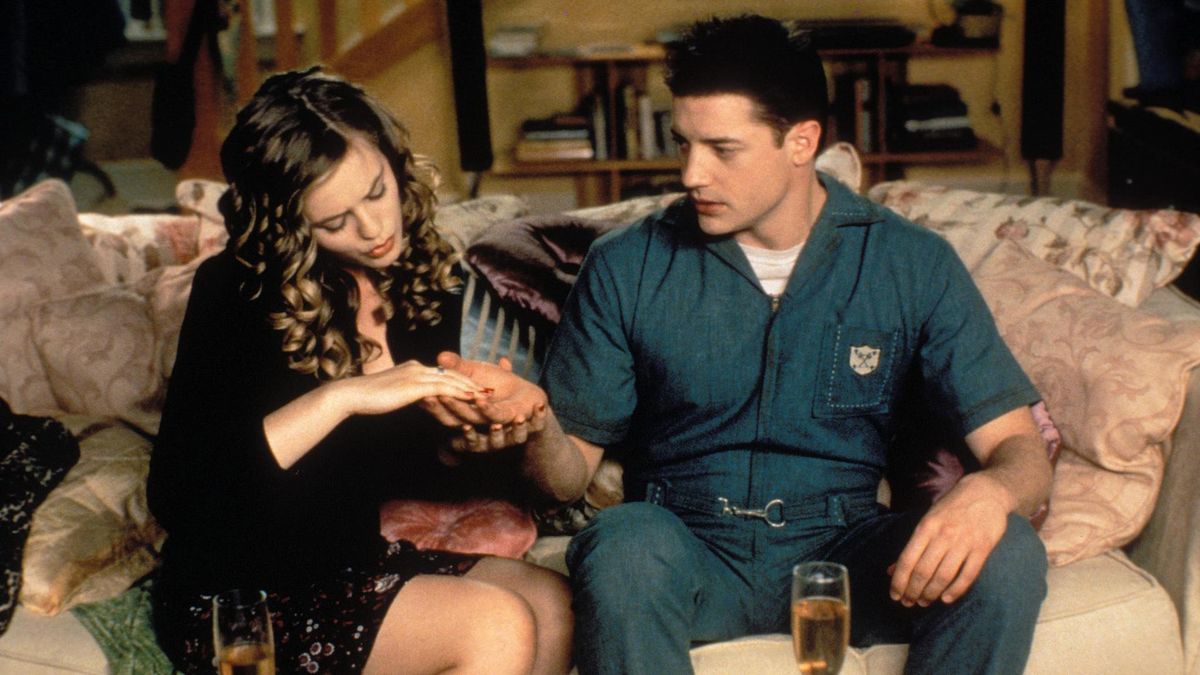 In a hilariously quippy – if not a bit dated – heartfelt comedy, Brendan Fraser wins the hearts of all as the sincerely sweet Adam Weber in Blast from the Past. Due to Calvin Weber’s (Christopher Walken) obsessive doomsday prepping habits and a malfunctioning jet crashing into their backyard, the Weber family spends 35 years underground in their bomb shelter. Since Adam’s entire life has been spent underground, he has learned a lot thanks to his also very intelligent father Calvin. This adds to the hilarity of each situation, while Fraser sells each and every innocent line delivery with utter perfection. With Christopher Walken, Brendan Fraser, and Sissy Spacek, there’s a lot this one has to offer. Endlessly entertaining, thrilling (in it’s time), and pure fun, The Mummy is most definitely the best Brendan Fraser movie of all time. The one that brought Fraser true stardom, this movie definitely has its corny 90s moments but delivers on all the action and scares that audiences didn’t even know they were looking for. The truest fans of Fraser look to this movie to re-watch as a comforting classic. Fraser is a perfect action hero: charming, funny, dangerous, and particularly badass. It of course doesn’t hurt that he has a great cast of characters on his side all doing their part to make this as good as it is, but it would be nothing without the irreplaceable presence of our man: Brendan Fraser.

Looking for more of the best movies by actor? Take a look at our top picks below:

Diwali 2022: Here are the Best Gaming Accessories This Festive Season Including Headphones, Keyboards, and Mice